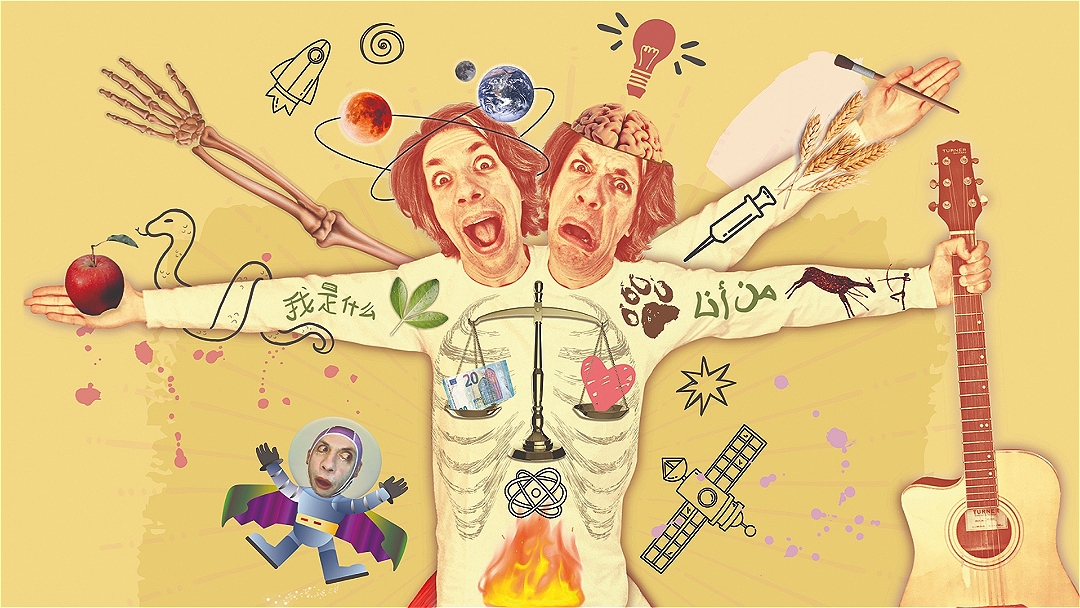 What makes us human?

Multi-award-winning science-singer-songwriter John Hinton hasn’t just got one answer, he’s got twenty-six – one for each letter of the alphabet – and he’s turned them all into comedy song. He’s accompanied on his journey through all things human by the Imaginaut – a digital avatar who has his own ideas about how the show should run, and is determined to let the audience have their say about which songs are heard and in what order.

John is the writer and performer of musical comedies about Charles Darwin, Albert Einstein and Marie Curie, all of which have previously toured with Applause, and has also created several previous Ensonglopedias on different themes. The show is peer reviewed by scientists, healthcare professionals and academics. Suitable for all humans old enough to think and laugh at the same time. “John Hinton is an absolute joy… This guy could get anyone interested in science” – Adelaide Theatre Guide “Ensonglopedia of the Human is a magical show, wonderfully performed by Hinton… with an energy that the Duracell Bunny would be envious of” – four stars, The Reviews Hub

This website uses cookies to improve your experience while you navigate through the website. Out of these, the cookies that are categorized as necessary are stored on your browser as they are essential for the working of basic functionalities of the website. We also use third-party cookies that help us analyze and understand how you use this website. These cookies will be stored in your browser only with your consent. You also have the option to opt-out of these cookies. But opting out of some of these cookies may affect your browsing experience.
Necessary Always Enabled
Necessary cookies are absolutely essential for the website to function properly. This category only includes cookies that ensures basic functionalities and security features of the website. These cookies do not store any personal information.
Non-necessary
Any cookies that may not be particularly necessary for the website to function and is used specifically to collect user personal data via analytics, ads, other embedded contents are termed as non-necessary cookies. It is mandatory to procure user consent prior to running these cookies on your website.
SAVE & ACCEPT
×